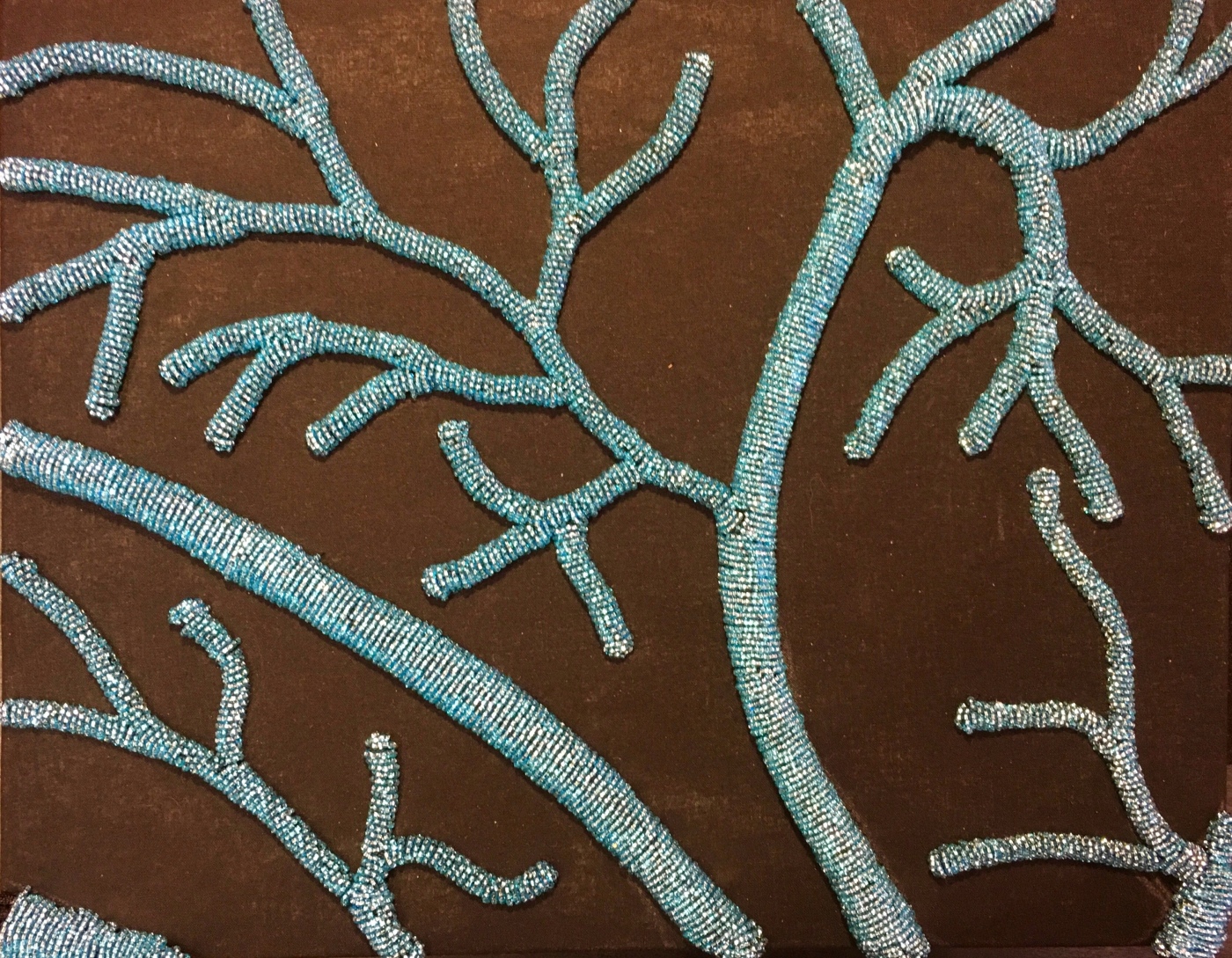 Since starting to create SciArt out of beads in 2016, I have mostly been making framed canvases with one or several central objects, mostly neuronal cells. These works were meant to resemble images acquired under a fluorescence microscope, primarily coming from in vitro neuronal cultures, which I have worked with so much in the lab. These images typically have a lot of black empty space in the back, accentuating the beautiful morphology of the individual cells.

The closest I have come to filling in most of the space with beadwork was in “Abyss” and “The Void”, both of which were bordering abstraction. All of my previous pieces have been showing separate objects, which are often used in basic research, but are not truly representative of whole tissue.

But then I came across this magnificent image on Pinterest. I was immediately hooked! It was the first time that I considered making a piece that would be completely covered with beads, feeling somewhat intimidated by the amount of work it would present. But I absolutely could not resist!

This image shows a close up of the retina tissue, where the blue structures are blood vessels, the red lines are axons of neurons, cell nuclei are shown in orange and the green cells are glia. Needless to say that recreating a whole section of tissue is much more challenging that making individual neurons.

I started working on it about a month before entering the SciaArt Center residency program. I decided to flip the image, because having the branches spread out upwards gave me a more positive outlook. I was able to work through embroidering the blue branches of blood vessels, but then had to focus on the joint project with Darcy Elise Johnson, leaving it at this stage.

Also please follow me on Instagram for more up to date pictures of my work in progress!

After a brief hiatus, I am back at my art table. I am not sure what was going on with me over the past couple of months, but I just couldn’t bring myself to start a new project. I have been marinating a few ideas and deciding on the best technical approach. But as much as I like to plan, some things only become evident when I actually start working.⁠⁠
A super #closeup view of one of my #bead covered #candleholder projects, showing some branching dendrites.⁠⁠
In an effort to purge unnecessary pics, I started scrolling through my old Google photos and came across some old #workinprogress pictures. This was the prep work for a project that never got completed, but one I keep meaning to return to. It actually hangs half-unfinished in our bedroom and makes me feel guilty every time I look at it. 🤣🤦🏻‍♀️.
Our mind is a truly beautiful and elusive concept. Despite massive progress in brain research, we still cannot quite explain where our mind is and what it looks like. ⁠⁠
I have been waiting for this day for a long time!⁠⁠
Introducing (finally) completed "Muted Potential"! ⁠⁠