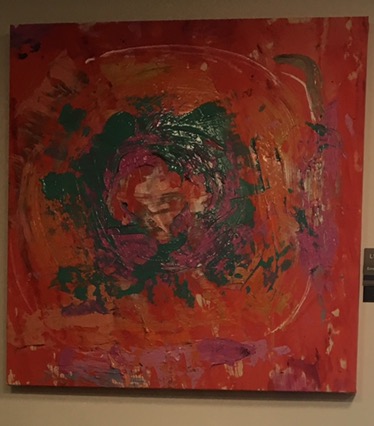 Yesterday I stopped by to see my graduate school advisor.  When I arrived, he was in a meeting, so I spent some time sitting in the waiting area.  The office has changed over the years since I’ve left.  Some furniture was upgraded, and names on some office doors have changed.  People are forging their way forward, building their careers.  One of the things that did not change though is still taking the central stage in the office.  The so called “Orange Pleasure”.

I don’t know the details of how exactly this “pleasure” came about, but seeing it again has allowed for some very vivid memories to resurface.

I was a graduate student at the time.  Out of the blue, the whole lab was invited to a small reception at the office, with wine, cheese and crackers (any graduate student’s dream – oh, the low standards at the time).  While most of the people would have honestly preferred to stay in the lab and work, attendance to this event sounded borderline mandatory – we had to show our support.  At the reception, our professor graciously accepted the “Orange Pleasure” painting from an artist he met at an event.  He spoke of the gray existence of scientific life in the lab, and how we could all benefit from a splash of color in our life.  He spoke of the repetitive nature of lab work and how such a painting could fire up our imagination.  How given the abstract nature of the piece, each lab member would see what they want to see in it – signal transduction pathways spreading and rippling through the cells.  I remember standing there and thinking about how far fetched it all was from what we actually worked on.

More recently, there has been a push to redefine the STEM (Science, Technology, Engineering, Math) field and make it STEAM again, with the letter A representing Art.  Last week, I attended the 198th Annual Meeting of the New York Academy of Sciences (also mentioned here), where I met Danelle Marqui Brown, the founder of By Mnemosyne.  The premise of By Mnemosyne is that the nine muses of the arts and sciences were once considered to be complementary to each other; but with time and technological progress they began to diverge.   Our conversation nostalgically revolved around classical examples like Leonardo da Vinci, who was an artist and a scientist in one.

When I was in college, my parents and I went on vacation to Fort Myers in Florida.  While my parents liked to sleep in, I would go to the beach in the morning.  On one such morning, an elderly man with a small dog was passing by and decided to strike up a conversation with me.  He asked me the classical questions of what I wanted to be when I grew up.  At that point, I already knew that I was interested in biological sciences with a potential inclination towards medicine.  One question he asked me, that stuck with me since that time, was whether specialization is beneficial or detrimental in the scientific community.  There are two sides to each coin.  There is so much knowledge coming out on a daily basis, that there is no option to try to learn everything; at the same time being able to see the big picture can be equally, if not more important.  Hence, the explosion of systems biology and bioinformatics approaches across scientific fields.

The same concept may apply to art and science.  While each lab tries to carve out a unique niche, more and more higher order scientific problems require cross-functional teams that could examine them from different angles.  Different people also have different learning styles.  Some people absorb knowledge through  reading, some through listening, some by doing.  Personally, I prefer visual depictions of information.  Figures and schematics make it much easier for me to grasp a complex concept.  For some people it may be art.

Finally, there has been a lot of discussion of making science accessible to the public.  Aside from industry, the vast majority of research is funded by the government, taxes and foundations, which means that the money comes from the general public.  However, once the grant is issued or the check is signed, most of the research  appears to happen behind an “iron curtain” of the scientific community.  To address this issue, disease foundations such as NMSS take on the mission of educating the public, and young scientists share their passion through channels such as The Story Collider.

At NeuroBead, I would also like to lift the curtain and reveal the beauty of science that we get to appreciate every day, and make it more publicly accessible.  Come check out my first pieces at my Etsy shop and let me know what you think.