One of the major challenges in the field of neuroscience is the poor ability of neurons to regenerate after acute injury.  Conditions such as spinal cord injury sever the neuronal connections, leading to permanent paralysis with no treatments currently available.  After birth, the vast majority of neurons lose their ability to divide and create new cells, thereby making functional recovery close to impossible.

Countless attempts have been made to find drugs that could promote growth of spared neurons and allow them to restore lost connections, but the results have been quite underwhelming.  Aside from the multiple negative extrinsic signals that the neurons face after injury, their growth capacity is significantly hindered after development.  This poor intrinsic growth status is very difficult to reverse with treatment. 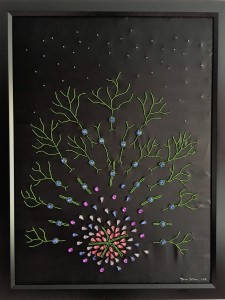 While stem cells exist in certain areas of the brain, these populations are insufficient for replacing what was lost after injury.  Neural stem cell cultures provide a promising approach for treatment of such conditions.   These cells can be used to replace the lost connections.  Moreover, they can be derived from the specific patient in need and applied as personalized medicine.  Using the latest scientific methods, cells can be derived from any tissue, such as the patient’s skin, expanded in a dish and induced to differentiate into the necessary neuronal cell type.  Initially, these cells form beautiful structures, called rosettes, and express markers of pluripotency.  A lot of the commonly used markers reside in the cell nucleus and if stained with a red fluorescent antibody, show up as purplish in color as they overlap with a traditional blue nuclear stain.  As the cells begin their journey towards becoming specialized, they migrate away from the rosette, lose their early markers and acquire those of mature neurons, such as tubulin, which is often stained in green.  They also acquire increasingly complex morphology by forming processes and branching.  These cells begin to look like sun rays emanating from the rosette.  They stem from the center and reach towards the stars of secreted factors that attract them.  As the sun rises, it gives hope for the bright future of treating debilitating neurological conditions.

Please email me at yzorina@gmail.com for pricing information.

Please sign up to be updated on the current NeuroBead art pieces and the stories behind them.

To see more of my work please follow me on Instagram and check out my Etsy Shop!

Have you seen this little adorable #squirrel in my #etsyshop? It is a #brooch that can be displayed on a #painting when it is not being worn!⁠
It has been a while since I posted an actual #microscopy image, but it is the bread and butter of my daily job. These are not neurons, but breast cancer cells that I’ve been using for a compound screen. While in many cases I screen for novel compounds that specifically kill off cancer cells, but not their healthy counterparts, here we were looking at a couple signaling proteins.⁠
Do you know what stem cells can do for you? ⁠⁠
“Deep Within” is one of my smaller (and more affordable) works which I made by going a bit outside of my comfort zone. Instead of making everything out of seed beads, I used large blue crystals to portray the cell bodies in this little section of the hippocampus.⁠⁠
Here comes the frame! But it’s still far from done... ⁠⁠
This beaded lady is about to fly to her new home this week! I really have mixed feelings about parting with her. ⁠⁠