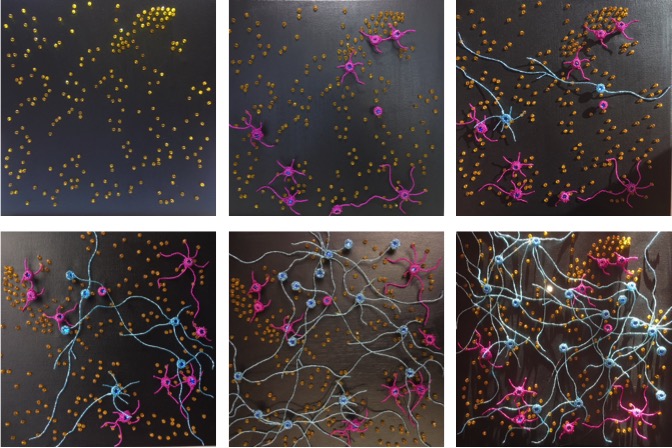 As I have mentioned before, most of the time, art and science coexist in my brain.  While the setting, such as being at work vs. at home, may dictate which side dominates, the other side rarely shuts off.  In my scientific career, I have spent over 13 years using microscopy to acquire and analyze data.  When I look at fluorescence microscopy images, they always tickle my aesthetic side.  The opposite is also true.  While I use art to (partially) shut off rational thinking, I cannot prevent my left hemisphere from taking part in the decision-making process.

Throughout the time I have spent so far on making this piece, I have been feeling conflicted about the purity of my technique.  While I tend to refer to my work as “mixed media” (for the lack of a better term), I really don’t like to mix my methods.  For example, sewing the large yellow rondelle beads directly onto the canvas went against my usual approach of using small seed beads on a wire.  This “noisy internal dialogue” interferes with my sense of flow.  Where do you find the balance of staying true to your style and not being afraid of learning new things?  Is it an excuse for not taking the risk of expanding your horizons or does it really feed into defining your identity?

This week, I came across a funny picture on Instagram showing different approaches people take to pick up pipette tips from a box in the lab.  Although I have seen something similar before, it still made me laugh.  I realized that while I certainly cannot call myself a particularly neat person, I always use the so-called “predictable” method (as opposed to the “artist”).  When I need to use a common box that was used in any other way, it causes a bit of a visceral reaction.  The same probably goes for my art.  It needs to follow a smooth, repetitive and possibly predictable process to be satisfying. 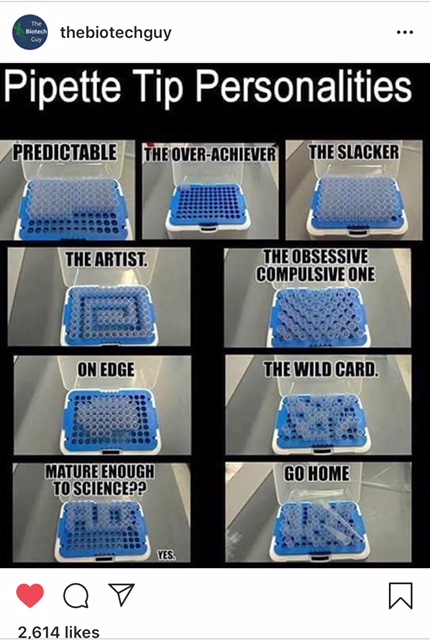 And so far, that is mostly what I have been doing.  As Darcy mentions in her entry this week, the original image is too complex to be fully rendered, so I need to be selective in which cells I decide to make.  My typical method involves stringing beads on a thin wire, but given the complexity of the network, I have considered doing some sewing of the thin processes as well.  So far that hasn’t happened.  It has been particularly challenging to create the long connections between separate cell bodies using wire, but I am trudging along.  Sooner or later, I will probably give in and switch to needle and thread, but then what’s more important – accurate recreation of the image or a sense of unity?