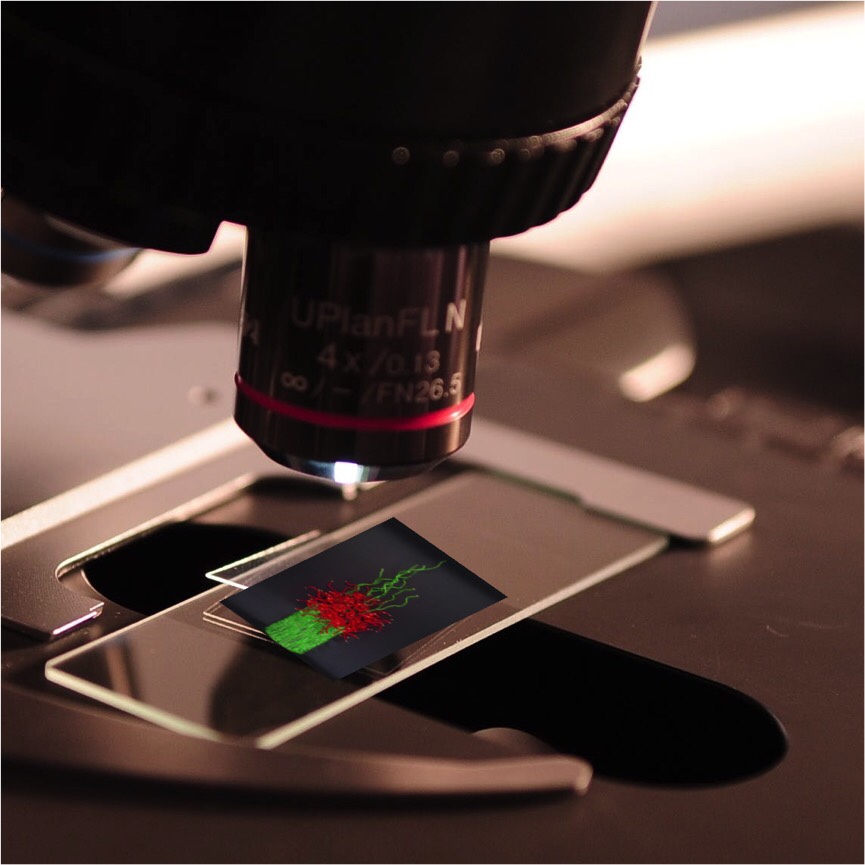 Over the last couple of years, I have been thinking a lot about how SciArt can become more relatable to people who do not have a scientific background. How do we distinguish it from the more common concept of modern or abstract art? While art is often meant to be interpreted through the “eye of the beholder,” it is important to me for my work to be seen as more than the fruit of my imagination. This is why last week I decided to put some of my art into context; some more and some less realistic.

First up is “Transformation”, which shows colocalization of proteins as they slowly transition from the cell body to the dendrites of this neuron. This comes directly from an image of a single neuron acquired on a fluorescence microscope (not by me). Of course, I had to simplify it before attempting to make it out of beads, especially because it was one of my earliest works and I had not yet learned a lot of the tricks that I know now. In this case, I decided to reduce the structural complexity and not include the dendritic spines (that came later). For me this was more of a study of color transitions. When I first studied painting in school, I fell in the love with the technique of blending colors. Here I wanted to see if I could create a similar effect using beads. In my attempt to bring SciArt back to reality, I decided to put this image on the screen of a microscope to show how it comes directly from research. 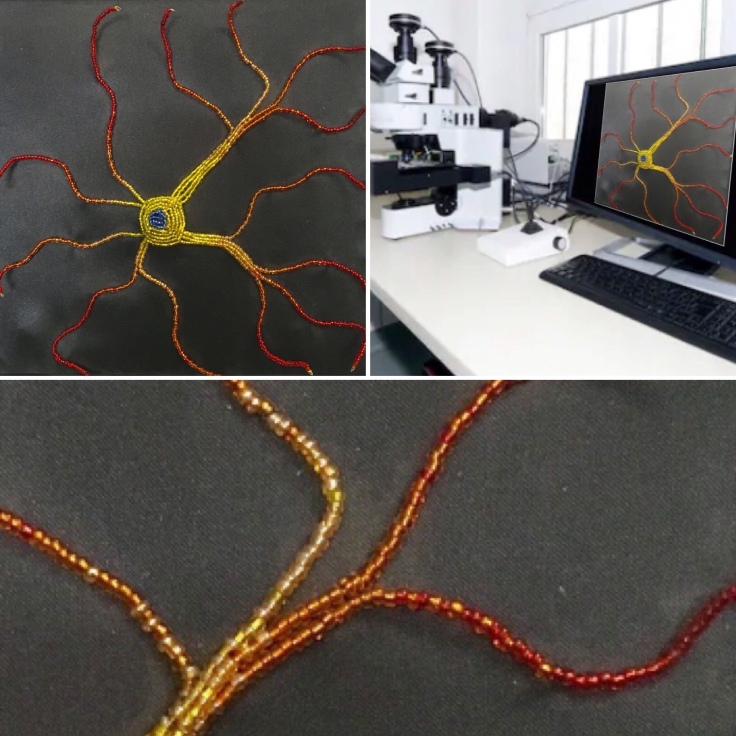 Funny fact – while technically neurons do not have a top and a bottom, this seemed to be the most aesthetically pleasing position for me. When I finally got a silver pen that would be visible on black fabric, I signed it on the wrong side! Now the question is, whether it should hang differently or if the signature does not necessarily need to be on the bottom. What do you think?

For “Sunrise” I decided to move a bit further away from reality. While the image was loosely based on microscopy and stem cells, I wanted to take the concept a bit further and put it into the unlikely setting of an actual sunrise. I loved it when I found this free image of looking at sunrise through a magnifying glass which does such a great job of combining the macro scale of the sun and the micro scale of stem cells. You can read more about it here. 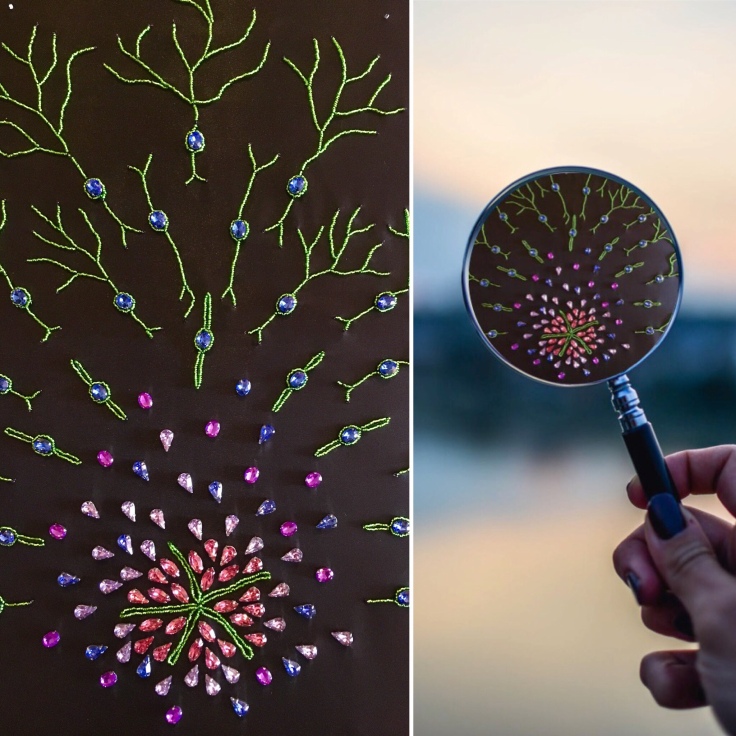 And then I took it a step further. “Tortured” is one of my favorite works and is directly based on my grad school and postdoc research. It shows an injured CNS nerve, where a few axons are attempting to grow past the glial scar at the main site of injury (in red). I cannot even tell you how many hours I spent looking at these nerves under a microscope, not to mention sectioning them in the first place. While playing with this image, I discovered a new function in PowerPoint, where you can actually rotate or lean images in the third dimension. I was really determined to make it look like it was lying flat on the slide. LOL.

Ironically, “Tortured” went through physical injury itself. Last summer, I was actively looking for a photographer to take professional pictures of my art. I found a Groupon deal, called the studio, but was told that it could only be applied to portraits. But the photographer got intrigued when he heard about science-based art. He asked me to stop by with one piece and said that he would give it a try for free and if he could take good pictures, then he would charge me. So I wrapped up “Tortured” in multiple layers of bubble wrap and put a piece of cardboard in the front to bring it over. Can you guess where this is going?

The two of us sat for almost an hour chatting about SciArt and him telling me his life story of doing photography for over 30 years and going through a divorce in the process. In the end, he asked me to leave it for a couple days for him to try out a few settings. Though feeling uneasy about getting it back, I left it with him. The following week, he sent me a few pictures (disappointing to say the least), and when I said that I was hoping for something better, he told me to come and pick it up. While I expected him to act more professionally, he left my work at the front desk, not giving me a chance to talk to him. Later that night, I went straight to a biotech networking reception and ran into an old acquaintance. She asked if she could see my work, and when I took it out, I almost screamed! It was half smooshed in the front! I barely made it through the event, half-heartedly talking to people and only thinking of going home to attempt to fix it. Long story short, I managed to fully restore it in the end. It took me several months and some sort of a trigger to make the connection between the original work title and what it ended up going through. LOL.

Bringing it back to the present, here’s the funniest part. The week that I started thinking about manipulating these images, (dirty term in science, I know!), was an exception to my usual work schedule. In the interest of not postponing an experiment until the following week, I decided to come into the lab for a couple hours on a Saturday. I scheduled it on my phone and set an alarm. Don’t know what happened to it, but I completely forgot! Meanwhile, I spent the Saturday morning thinking about what images would be worth using for this concept series. I realized that it would probably require Photoshop, which I don’t have on my home computer. I considered going to work just for the sake of trying to modify the images. And that’s when it hit me! I had more important things to do in the lab!

In any case, in the two hours that I spent there, I managed to get both tasks done and was quite pleased with the results of each one.

If you got this far, please check out my gallery and consider supporting my work on Patreon. And if you haven’t yet, please follow me on Instagram.