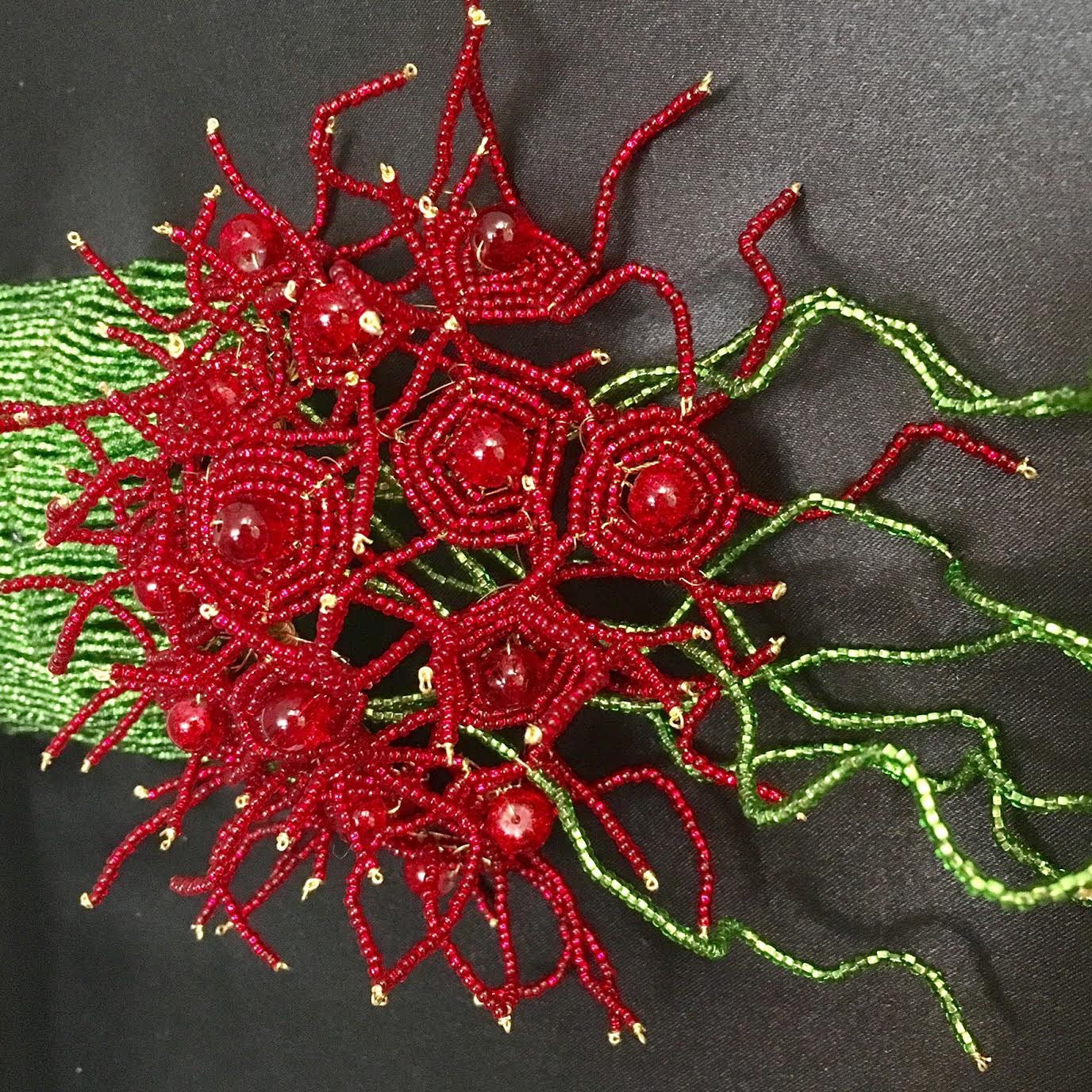 This post is the continuation of Part I of my exploration of my methods development. If you have missed it, I recommend you start here.

Moving forward, in “Tortured“, “Abyss“, “Hope“, “The Void” and “Attraction” I started building much larger 3-dimensional structures. It was quite challenging to make them stay up and not lose their shape. It was especially challenging in “The Void” (shown with a frame at an angle below), where several large pieces needed to be created separately and then arranged in such a way that a neuron-shaped void would be formed in the center.

Someone once said that “everything genius is simple”. But it took me 2 years to figure out a very simple way to support large pieces. All I had to do was sew on additional fabric and stuff it with cotton, rather than trying to build a carcass out of wire. Live and learn.

Here is one of my most recent projects where I have finally implemented this technique, because the structure was too complex to build out of wire. I really wish I would have thought of this sooner…

As a side note, have you ever read the story of what happened to “Tortured”, which represents nerve injury, in real life? I have written about it before, but will provide a short summary here. If you are interested in details, you can read more about it in the original post.

Ironically, “Tortured” went through physical injury itself. In 2018, I was actively looking for a photographer to take professional pictures of my art. I found a Groupon deal, called the studio, but was told that it could only be applied to portraits. But the photographer got intrigued when he heard about science-based art. He asked me to stop by with one piece and said that he would give it a try for free and if he could take good pictures, then he would charge me. So I wrapped up “Tortured” in multiple layers of bubble wrap and put a piece of cardboard in the front to bring it over.

Given the complex nature of my work, he asked me to leave it for a couple days for him to try out a few settings. Though feeling uneasy about getting it back, I left it with him. The following week, I came back to pick it up. Later that night, when I took it out, I almost screamed! It was half smooshed in the front!  Long story short, I managed to fully restore it in the end.  Months later, I made the connection between the original work title and what it ended up going through…

In the meantime, if you like my work, please consider checking out my Patreon page to support my projects. I am currently working on making enough art to submit proposals for a solo exhibition, though given the fact of the COVID-19 pandemic it is very unclear when that could happen. But maybe this is just the right time to immerse ourselves into art to deal with the turmoil.

Thank you and stay tuned!